Posted on September 28, 2014 by iheardmyself

A few days after returning from Italy, and so happy to be home and with my kids, friends, a daily yoga practice and all that is familiar, I woke up bright and early at 2 am in a jet lag fog. Since there was no one around to play with at that hour, I turned to my computer and thought, Hm…well what should I do with the rest of my life?

I thought, Hm, maybe I could take an art class this summer. Yes, that’s it. An art class would be perfect. So I went straight to the Oregon College of Arts and Crafts summer catalog on line and saw that there was an 8 day painting workshop being taught in 3 days by Pat Wheeler, a visiting artist from Maine.  Pat comes to Portland each year to teach at OSAC, and I had visited that same workshop, two years previously, when some friends of mine were taking it. At the time, I super inspired and made a mental note that I must take this class sometime in the future.

The future was happening in 3 days. I thought, ” I can’t possibly commit to an 8 day class! I am too busy!

Doing what? I just got off the boat from Italy so to speak and I really did not know what was up or down. An 8 day painting workshop might be just the thing to ground me back into life here.

I called my friend Dayna, who had done the class 2 years ago to see if I should pull the lever.

Three days later, I showed up with my acrylic paint, joint compound and half my studio so that I would have EVERYTHING I needed to create art.

And I loved Pat instantly. What a fabulous woman, artist, teacher. See her art here: http://www.patriciawheelerart.com 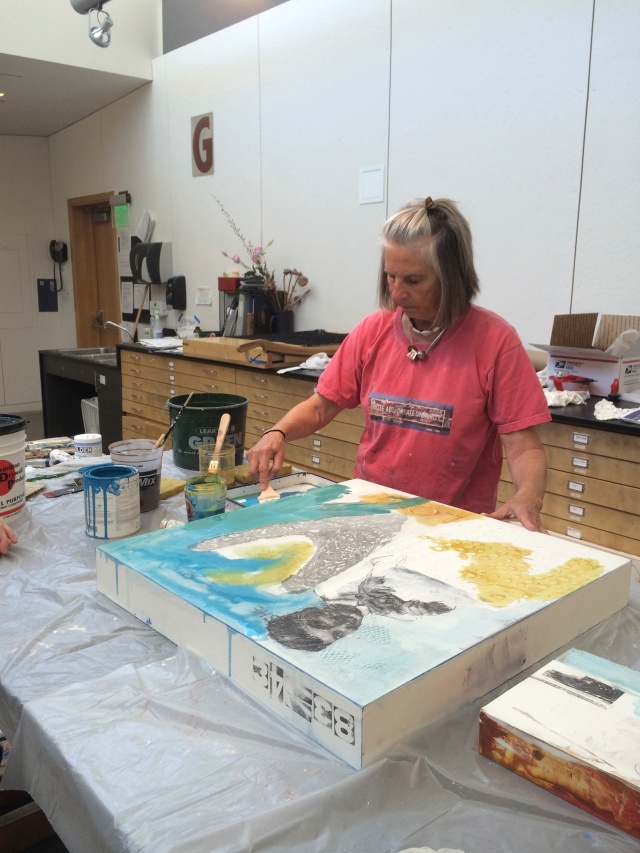 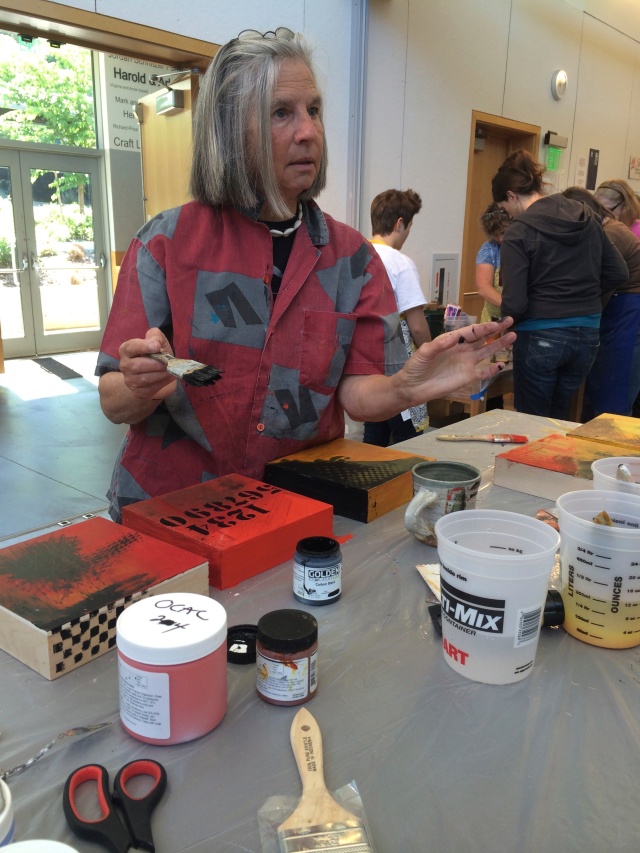 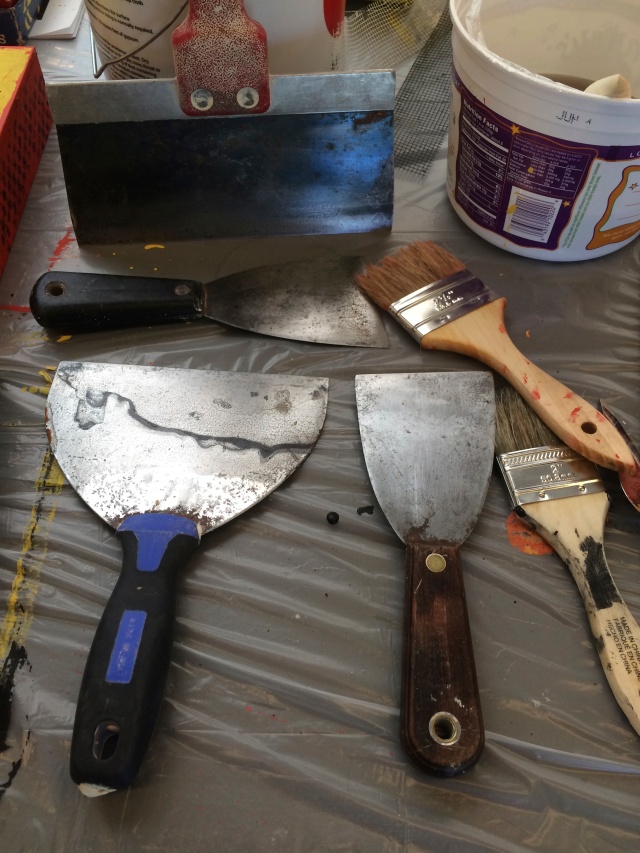 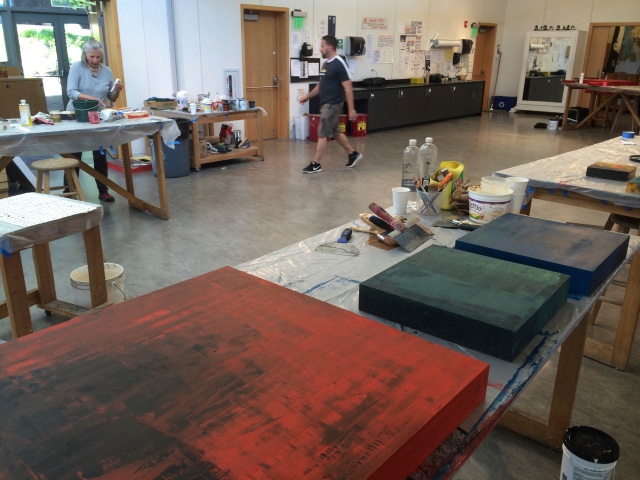 The first under layer 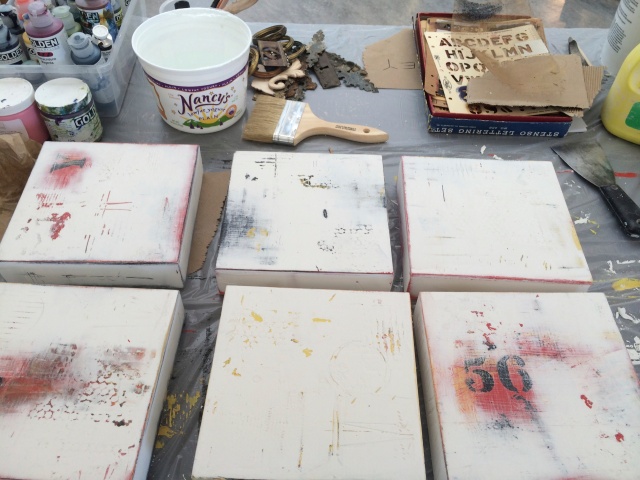 Building my boards up 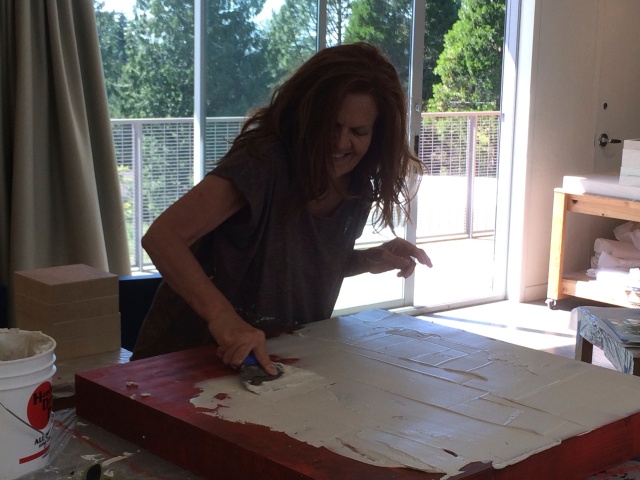 I proceed to have the most fun ever, throwing paint around with a palette knife, joint compound, sanding, scraping, collaging, I was in heaven. The people in the class were fantastic and we were in a cosy little painting bubble for days. 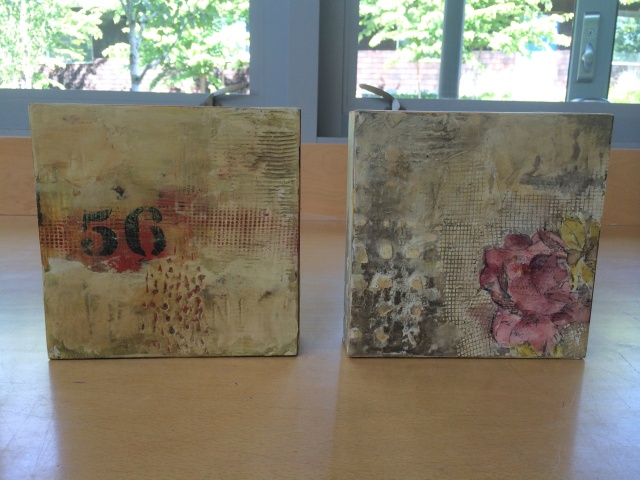 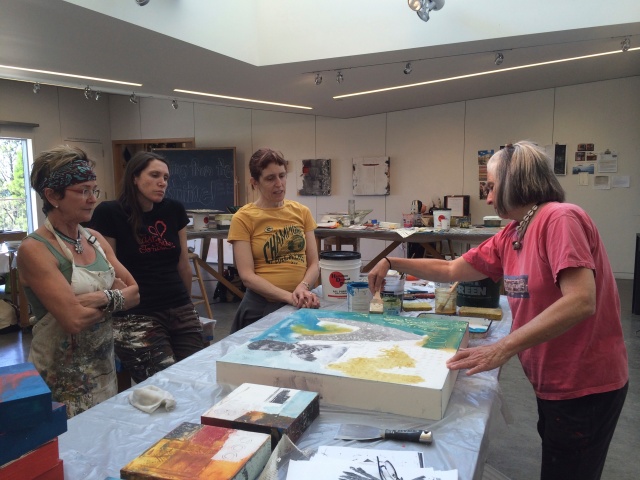 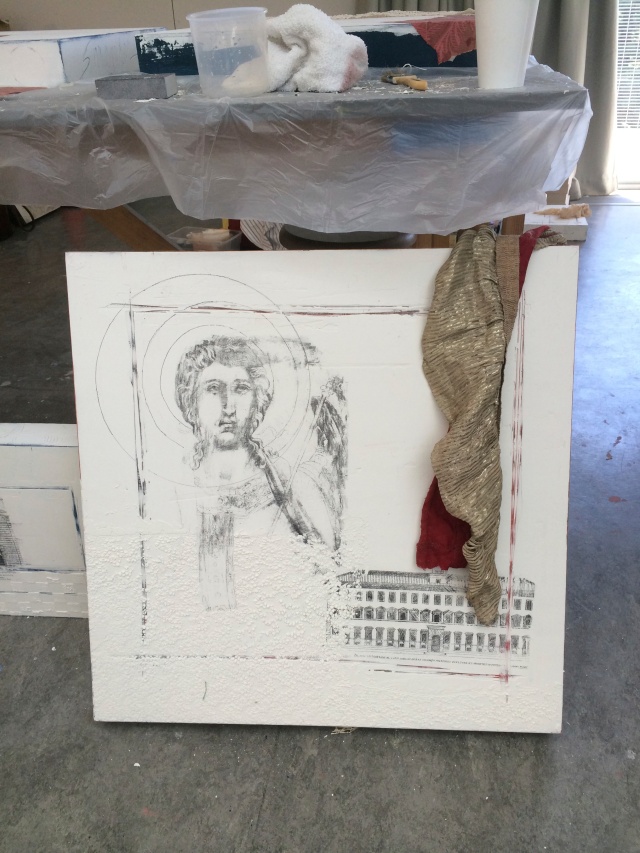 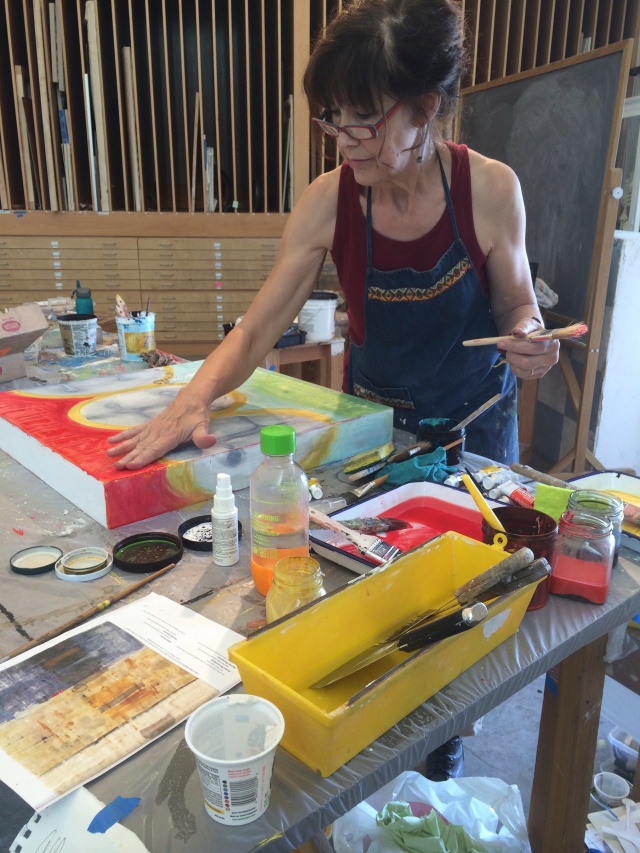 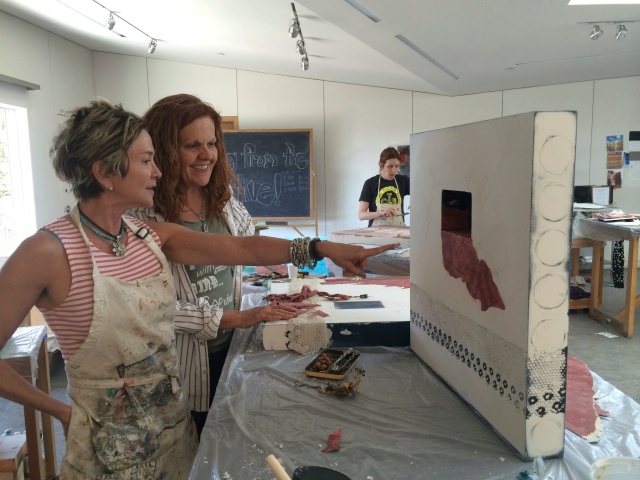 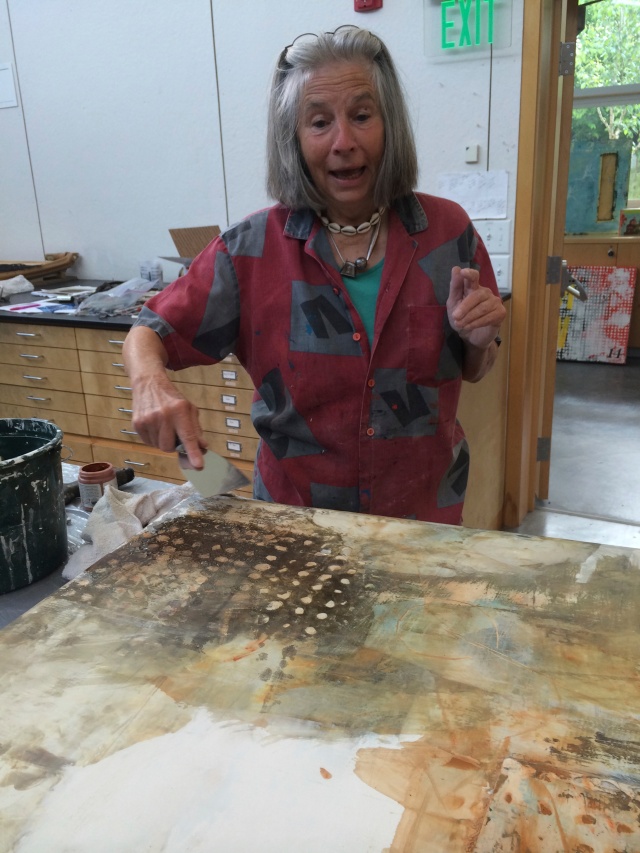 Pat starts working with Madonna imagery for the first time. Guess who got her into that? 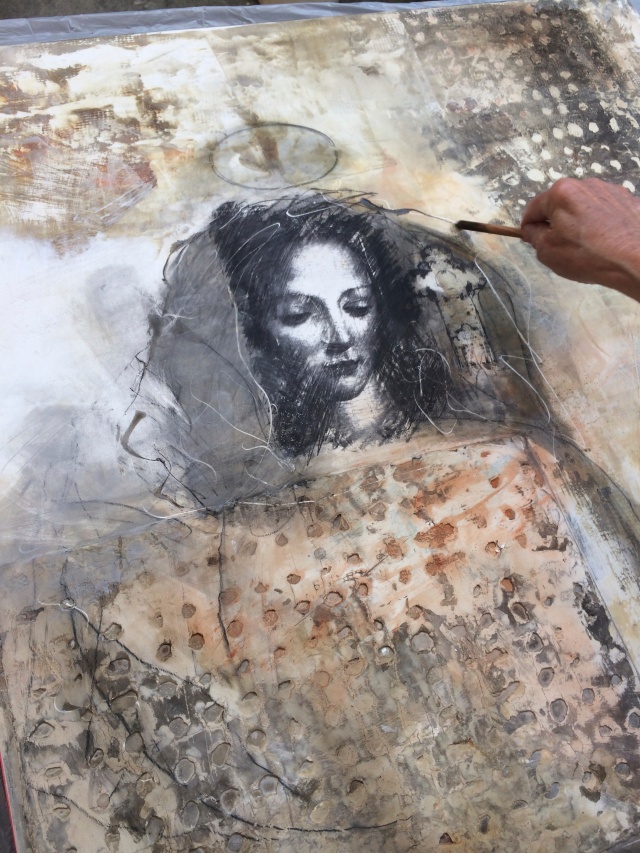 Pat and my new pal/classmate Kris, who just happens to live a block away from my house 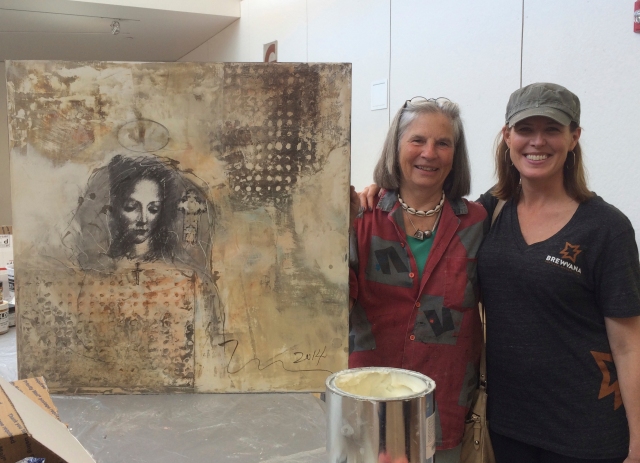 About 2 days into the class, I was up again at 2 am, not able to sleep, and my default go-to is always Facebook. There is a post that popped right up by my friends Emily Katz and Adam Porterfield. There was this photo below and a status update that said,  “Anyone interested in a 1500 ft. studio space in our rad new building?” 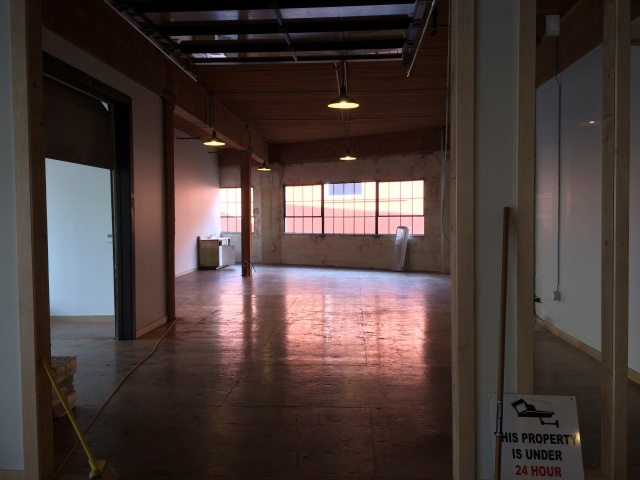 I started hyperventilating. A few months earlier,  while I was still in Italy, Emily and Adam had posted photos of a new studio they were moving into. I saw only a few photos and knew I wanted to be in that building wherever it was. I knew nothing more about it than the photos. I messaged both of them to see if there was other space available in the building and they said no, it was full.

I let it go, and forgot about it.

The one I know nothing about.

I message him on Facebook but he doesn’t respond. It is 5 am on a Sunday!

Why isn’t he answering?

I wait until 10 am. I figure that is a civil hour to call someone.

Relief floods over me.

He fills me in on the studio scoop. This historic building has been remodeled in the past 6 months by its owner and now is available for rental. Adam befriended the owner in the past several years, as his old studio was across the street and he was keeping his eye on the space. When the owner started refurbishing the spaces, Adam and Emily got a dreamy studio space and were able to recommend good tenants for the other available spaces. The 1500 ft. space was taken but then the people backed out, and I just “happened” to see the Facebook post. 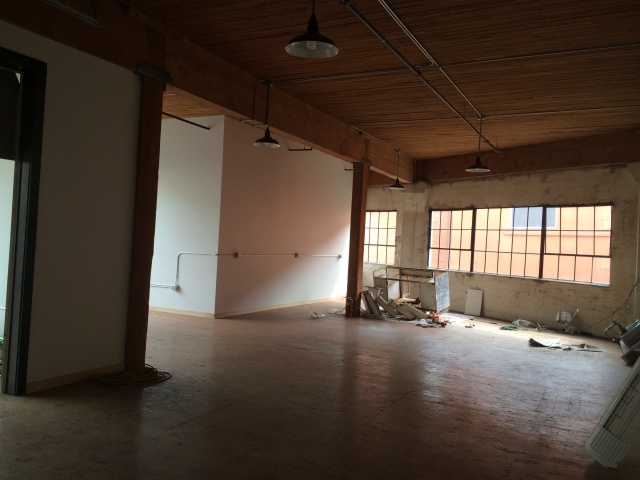 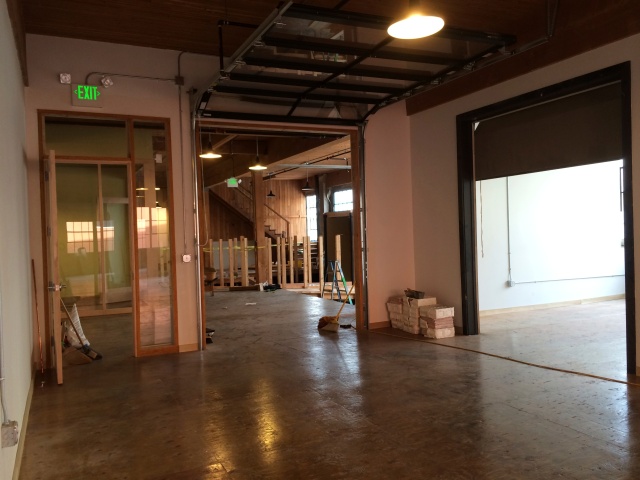 Adam said he could show me the building right there and then, so I threw down the paintbrush and bolted out of Pat’s class early. Fifteen minutes later I was inside this amazing warehouse space in N. Portland, close to N. Interstate and the Fremont Bridge. I took one look at the 1500 ft. space and knew I needed to be in there. I had no idea what I would do there (and I still don’t) but I knew that this was the ”next thing”, or one of the “next things” I had been asking for. 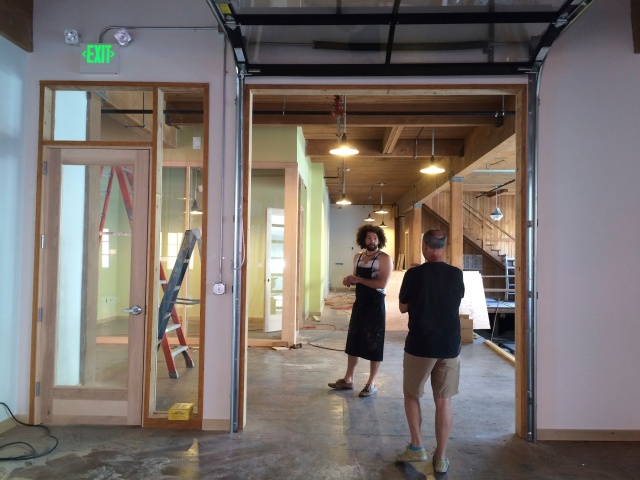 I have had a beautiful little studio for many years that I created on the bottom floor of the duplex building that I own with Rob, and it has served me well.

I have loved it.

I also have outgrown it, not only with all the stuff I collect bursting from the seams but in spirit. I have wanted to be in building with other artists, to have a creative community around me for some time now. It has been clear to me recently that the only way I was going to take my self seriously as an artist would be to get out of isolation, go to work each day, surrounded by other people doing the same thing.

24 hours later, I had a 3 year lease signed and had the keys to the most inspiring studio space, better than I could have possibly imagined.

I continued on in Pat’s painting class for a few more days until the end, fired up and turned on, and I knew that it was just simply no accident that I found Pat’s  class being offered in the early morning jet lag fog, lose myself in the creative zone during this class and a dream studio just “shows up” a few days later.

I have had too many things like this happen over the years to write it off as ”lucky” or “coincidence.”

I am quite sure that list I made under the olive trees had something to do with it.

I asked what was “next”.

I got my answer. I finally get to work as an artist. For real.

No more dilly dallying around, making excuses as to why I can’t make art all the time.

I now have the commitment of this space, rent to pay, and a job to do.

How will I pull it off?

I have no idea.

It is part of the unfolding adventure.

A few weeks after Pat’s class ended, she texted me asking me if I would like to trade her the first Madonna she had done in exchange for a week at Casa San Marco in Italy.

It was a no brainer. Madonna of the Studio. 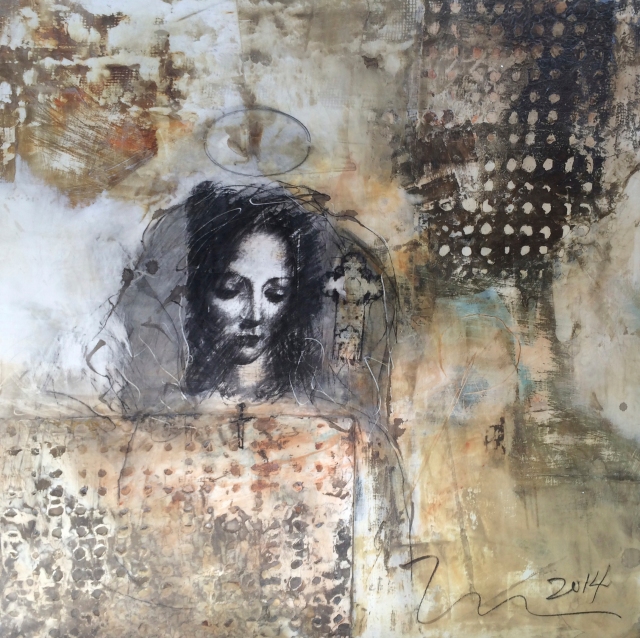 This entry was posted in Uncategorized. Bookmark the permalink.

4 Responses to The Next Thing